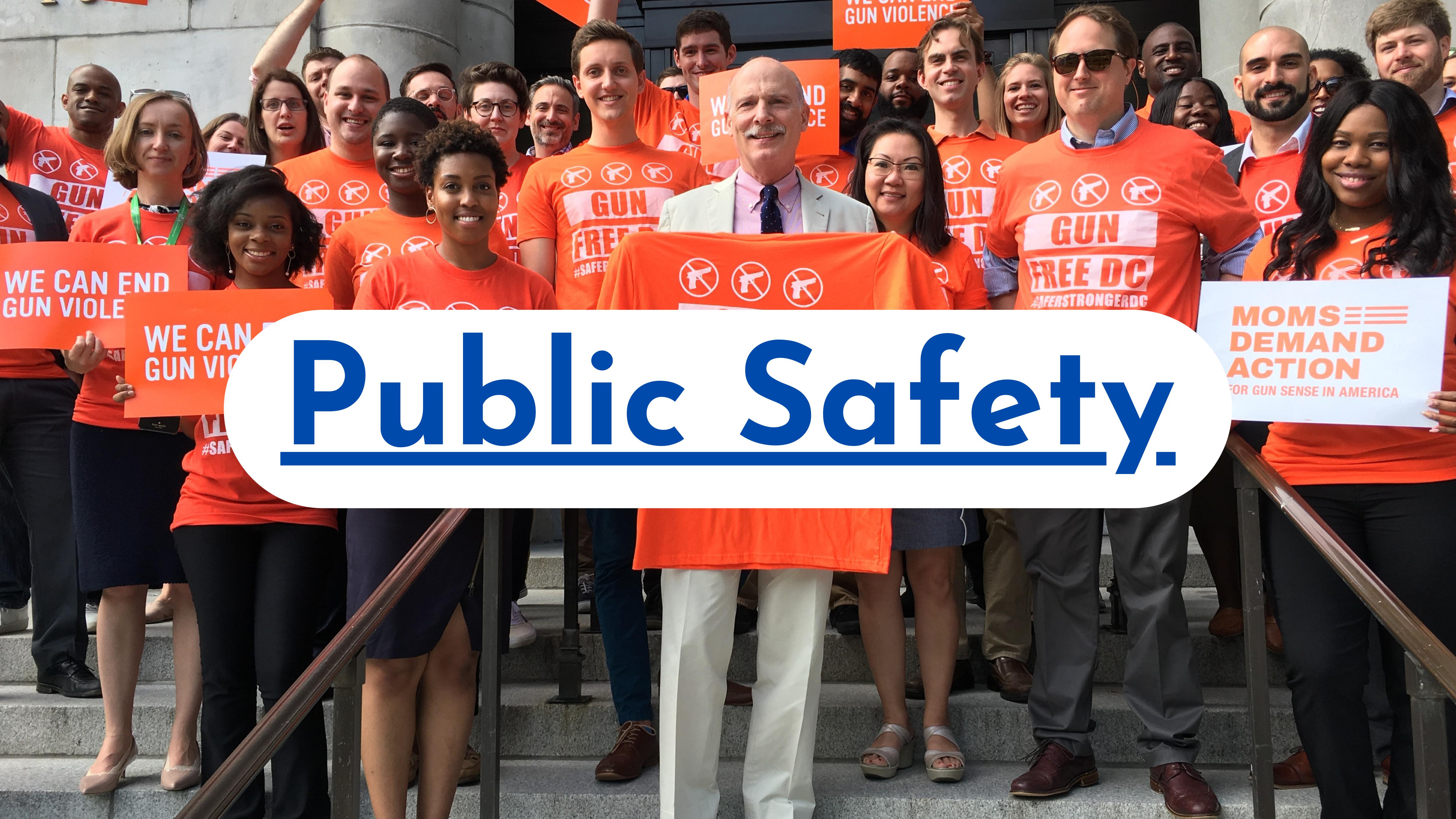 Every resident of the District deserves to feel and be safe in their own neighborhood and on their own street, and a core function of government is to provide for the safety of its citizens. During the years I chaired the Council’s Committee on the Judiciary (which has oversight of MPD and the criminal laws), the incidence of violent crime dropped significantly, and homicides reached their lowest level (88) in 50 years.

I recognize that there are two aspects to fighting crime: preventing it and responding to it. I also recognize that we must continue to push for accountability in the police force while still allowing police to be tough on crime.

On the Council, I have taken the lead in a number of ways:

Gun Control: I re-wrote the city's gun control laws after the Supreme Court's Heller decision that gutted our 1976 law that prohibited gun ownership. I have continued to stay on top of this issue, as our gun control laws continue to be challenged in court, to ensure we have effective gun control that can withstand judicial challenge. Working closely with groups such as the Coalition to Stop Gun Violence, Everytown for Gun Safety, and American State Legislators For Gun Violence Prevention, I revised the prohibition against gun carry licenses and, most recently, the prohibition against ghost guns. We have yet to lose in court despite having arguably the toughest gun control in the country. For my work on preventing gun violence in the District of Columbia, I have earned the distinction of being a 2022 Moms Demand Action Gun Sense Candidate.

Effective Justice: I'm proud that I authored the legislation to create an independent Department of Forensic Science to use best practice and state of the art technology to solve crimes with forensic evidence. The goal is to prosecute cases successfully, but also to ensure that criminals don't go free because the wrong person was convicted. Because of the recent scandal over the lab's integrity, I am working on legislation to strengthen the independent oversight that was built into the legislation establishing the lab -- the goal being to ensure this breakdown never reoccurs.

Police Accountability: For police to be effective they must have the community's trust. Not only did I appoint the Police Reform Commission in the wake of George Floyd's murder, I also have legislation pending based on that Commission's recommendations for strengthened accountability: a stronger, independent Police Complaints Board, a new Deputy Auditor for Public Safety, and a prohibition on the police bargaining how their own members will be disciplined for excessive use of force.

In recent years the incidence of violent crime has increased. Last year violent crime was up in virtually every category, and the 226 homicides was the highest in 18 years. Citizens have a right to feel safe, and if we want DC to continue to grow and serve as the region’s economic hub, it is imperative that law enforcement agencies implement known, research-based strategies to reduce violent crime.

First, the police have to increase their case closure rate. In 2021, only 46% of the year’s homicide cases were solved and only 26% of the robberies were solved. It is well known that many if not most criminals are repeat offenders. Closing a case and locking up the perpetrator is the most effective way to prevent future crimes that perpetrators may commit.

Second, police need to put more emphasis on criminal intelligence – knowing the gangs and understanding their “beefs.” By using intelligence, police can anticipate shootings. A significant number of them occur between known gangs and crews; much of it retaliatory. Former Chief Cathy Lanier employed this strategy as one of her first steps that led to the historic drop in homicides during her tenure.

Third, research has shown that focused deterrence is very effective in reducing violent crime. This strategy focuses on known violent offenders – sending them a message that every lever available to law enforcement will be pulled to extract swift and certain justice should they re-offend. Operation Ceasefire, implemented in Boston in 1996, is a famous example of this strategy. For years the District employed a strategy somewhat like this, called “GunStat,” focusing on the 50 most violent gun offenders, but not enough was done to ensure that the US Attorney, the court, and the supervised-release authorities stepped up to participate. A coordinated inter-agency deterrent strategy such as this would be powerful.

Fourth, the US attorney – the city’s felony prosecutor – has to be more aggressive in prosecuting violent crimes. Their decision not to prosecute, or to plea bargain felony arrests to misdemeanor convictions, has long-lasting repercussions where violent, repeat offenders are involved. While the US attorney is outside local control, it is possible to get his office to be more responsive. I saw that when I chaired Judiciary: by holding public hearings on hate crimes I got the USAO to step up prosecutions. In another instance the US Attorney ultimately charged an out-of-state driver with vehicularly assaulting a bicyclist after I repeatedly aired a video of the incident at public hearings.

Fifth, there needs to be greater transparency in the criminal justice system. We know how many crimes occur, and how many arrests MPD makes. But we don’t know the outcome of those arrests. To illustrate this simplistically: last year there were 226 homicides but zero first degree murder convictions. What happened? In the name of transparency, each year I put a small amount of money in the budget to support DC Witness. Please visit the website; but the city should be doing this, and doing much more of it.

Sixth, police command staff need to be intentional about building community trust. Citizens will come forward with tips, and as witnesses, if they trust that they will be safe and that law enforcement will successfully arrest, lock up, and prosecute criminals.

Seventh, we know that the lack of housing and employment are critical factors contributing to recidivism. Since a majority of criminals are repeat offenders, targeting returning citizens for successful re-entry has a proactive effect in reducing crime. Therefore, helping them get jobs and housing (and to overcome other barriers as simple as getting an ID) is an important strategy to reduce crime.

Finally, while the Council’s response in 2020 in the wake of George Floyd’s murder made sense at the time, we must now put more resources into the Metropolitan Police Department. With proper training – and appropriate discipline when a police officer abuses his/her authority – police are guardians of public safety. This is a core function of government.