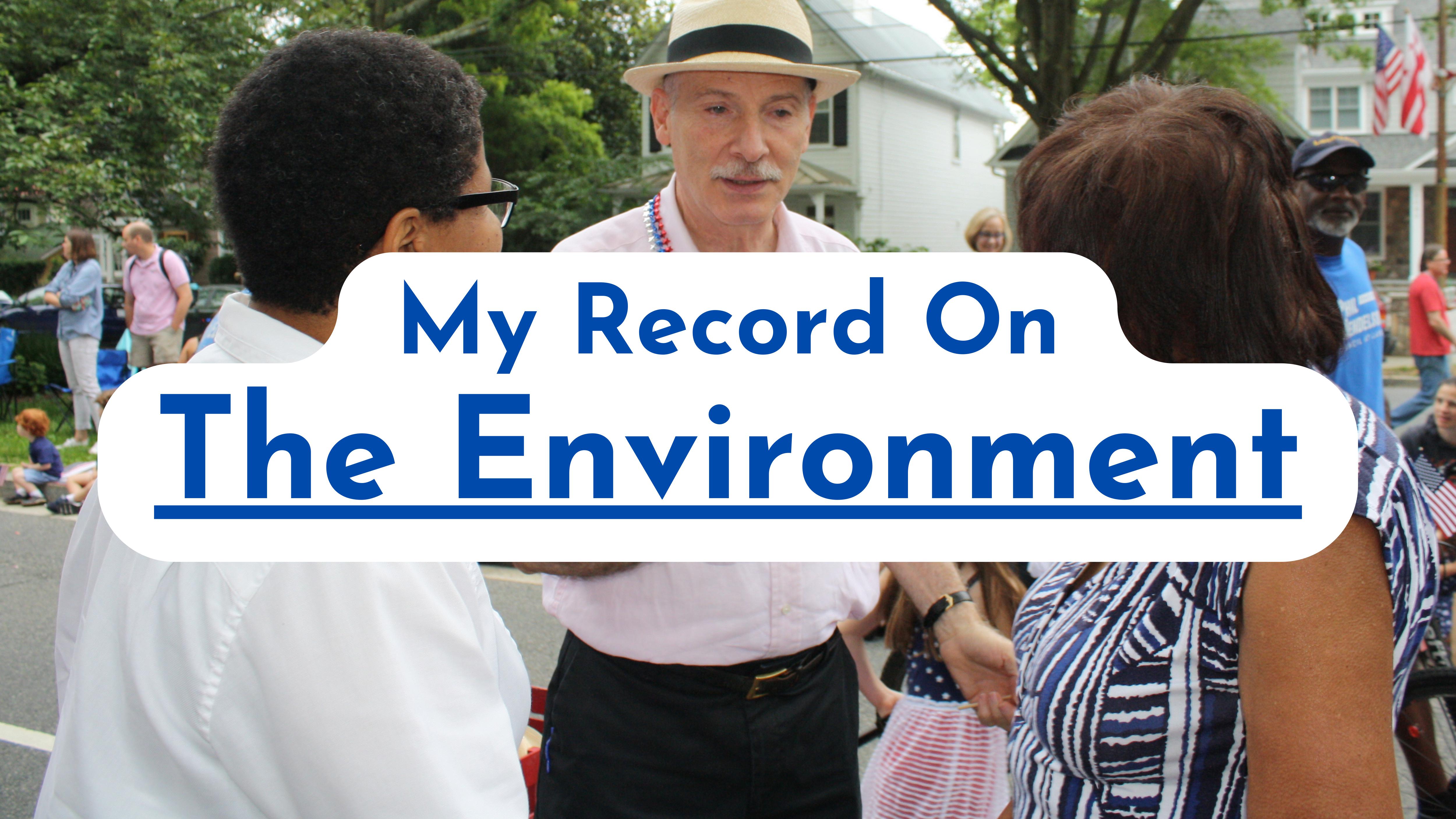 Protecting the environment has been a priority of mine throughout my tenure on the D.C. Council. The advantage of considering the re-election of an incumbent is that I have a record of accomplishments. It's a solid record. If past is prologue, you know where I stand.

Over the years, I have moved numerous measures aimed at protecting our environment and reducing the impact of climate change:

PR 24-154, Sense of the Council Urging WMATA’s Bus Fleet Resolution of 2022, adopted February 1, 2022, demanding that WMATA cease purchasing fossil fuel buses and accelerate the planned electrification of its fleet. I believe this electrification should happen more quickly than has been called for previously.

Bill 24-429, Metro for D.C. Amendment Act of 2021, on which I convened a joint hearing with Councilmember Cheh on February 23rd, 2022. This bill would promote public transit by providing a $100/month subsidy to DC residents.

DC Law 22-257, the CleanEnergy DC Omnibus Amendment Act of 2018 (and its precursor, Bill 22-812 the One Hundred Percent Renewable Portfolio Standard Expansion Amendment Act of 2018). As Council Chairman I ensured that this controversial bill navigated two committee referrals and was adopted in the final days of the Council Period.

DC Law 16-90, the Department of Health Functions Clarification Amendment Act of 2006, which culminated a multi-year struggle (now seems hard to believe) to ban smoking in restaurants and all places of employment. This was an important environmental issue at the time, and controversial.

DC Law 15-340, the original Renewable Energy Portfolio Standard Act of 2004, which I authored and got through the Council when the idea was relatively new.

DC Law 14-309, the original Urban Forest Preservation Act of 2001. I authored this law, although I am disappointed that it has not been vigorously implemented to ensure expansion of our urban forest.

I recognize the importance of D.C. having a strong public transit system not only as a means of transportation for our residents, but also as a means of reducing the impact that cars have on our environment. I have strengthened our public transit through quality appointments and funding throughout my tenure on the Council:

I ended the tradition of appointing councilmembers to represent the District on the WMATA board. I recently nominated Tracy Hadden Loh and Lucinda Babers to the board. Earlier, I nominated Stephanie Gidigbi to the WMATA board. I also moved Chris Hart for reappointment to the Metro Safety Commission, which he currently chairs.

I led negotiations through the Metropolitan Washington Council of Governments in 2018 to secure dedicated funding from regional partners for WMATA’s capital improvements. The annual $500 million - of which the District contributes $178 million - enables WMATA to leverage substantially more through borrowing.

I led District negotiations through the Metropolitan Washington Council of Governments to establish the Metro Safety Commission (DC Law 21-250). I then moved the Compact legislation through the Council. This promotes a safer rail system which in turn instills public trust that should increase ridership over the long term.

Last fall I pressed the Mayor to meet with environmentalists regarding her nominations to the Public Service Commission and secured such a meeting. I remain disappointed that she has not nominated an environmental candidate, like Nicole Sitaraman.

I served several terms as chair of the Council of Government’s Metropolitan Washington Air Quality Committee, pushing the states’ departments of transportation to accept stricter air quality standards to come into conformity with the federal Clean Air Act.

I led the fight on the Council to keep Klingle Road closed and reclaim Klingle Valley as entirely green space. I removed the TIP funding before the regional Transportation Planning Board.

I pressed the Executive to establish TMDLs for the District’s waterways, overdue per the Kingman Park litigation.

I joined environmental groups opposing the Executive’s efforts to weaken the potability standards for the District’s waterways.

There was a time when the clean bus fight was over diesel, and I worked closely with the Sierra Club and the Natural Resources Defense Council to demand CNG buses. Now the fight is to accelerate electrification. I believe WMATA should do better than the deadlines set forth in the CleanEnergy DC Omnibus Amendment Act. I drive an electric car and so I know it's possible that WMATA can do this.

Going forward, I will continue to support legislation that protects our environment and reduces the impact of climate change on the District. Our children, and generations to come, deserve to live in a habitable climate. We have only one earth, and I will continue to use my position as Chairman of the D.C. Council to push for environmental protection.